The story of the NatSol urine separating compost toilet pedestal

There are a number of advantages in separating urine and faeces in composting toilets. Some are outlined here. This has led to a number of DIY and commercial designs that work with varying degrees of success. What at first appears to be a simple problem turns out to be harder to achieve than one might imagine. The method of urine separation we employ is unique to NatSol toilets and this is the story of how we developed it. 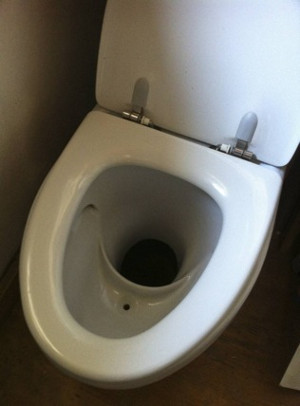 Back in 1993 I experimented with a bowl type urine separator on a domestic installation and discovered, as many people have, that they are very prone to blocking with soak material, toilet paper and worse. This is especially true when children use the toilet as they sit well forward. Around the same time Nick Grant and his partner were building their own home and had installed a very nice ceramic urine separating toilet pedestal in their temporary accommodation, see photo right. This gave them 7 years of experience with one of the better bowl type separators. However, when they built the new compost toilet for the house they abandoned urine separation!

Meanwhile I trialled a flat sloping plate leading to a gutter lower down. The problem of blockages now occurred further down inside the toilet. This was not so obvious to users as it occurred further away but was much more difficult to unblock.

I puzzled over this for some weeks before having a Eureka moment. As a physicist I knew that fluids stick to surfaces and follow them in apparently gravity defying ways. If you place a cylindrical object like a bucket on its side and pour water on the top it follows round to the bottom before leaving the surface. However, solids slide off the side and drop vertically. This difference in behaviour provided an elegant solution for separating solids from liquids. 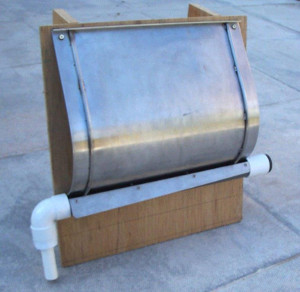 Many experiments followed trying various materials for the curved surface.  A non-stick surface such as Teflon seemed a good idea for avoiding soiling but it didn’t work as the liquids would not adhere. Stainless steel turned out to be good and I tested this thoroughly by making some urine separators from old kitchen sink tops. These were installed on a compost toilet in North Wales and are still working.

However, these plates were gently curved and not very daring in the extent to which they tested the principle employed. Even the lower part of the plate was not far off vertical and the urine gutter at the bottom could just be seen and so collected some unwanted material.

Around this time I joined Nick Grant & Mark Moodie of Elemental Solutions on a tour of ecological sewage systems. This was my first experience of the Aquatron, a device designed to separate liquids and solids coming from flush toilets and it also turned out to be utilising the Coandă effect.

This encouraged me to try a batch of more steeply angled stainless steel separators with an inbuilt gutter. Since then the design has been through further changes and refinements. Nick and I have experimented with and modified curvature to ensure that any solids depart from the surface where it turns forward towards the urine gutter, and that liquids stay in contact with it. The final result has provided efficient urine separation without solids blocking the urine drain.

Another problem we had experienced with funnel type separators is that they use a small diameter pipe and trap which tends to block very easily with urine salts. The NatSol separator is able to use a very generous 110mm outlet and trap that is almost immune to blockage.

During 2014 we visited some of our more heavily used installations and made adjustments to urine separating plates so as to catch more urine. In short we are being more adventurous with how much urine can be captured without increasing cleaning requirements significantly.

No urine separation system is perfect and a little urine entering the vault helps decomposition, but in general we are very pleased with the performance of this system.